For Makeover Monday this week the Data School joined the Live broadcast from the Tableau Conference on Tour from London’s Tobacco Docks. The Andys released a dataset on gender inequality in the US, and we got to work shortly before 3pm.

The first step was to chuck all of the data in and identify the story. I created a couple of basic bars to see what was going on and saw clearly the increasing inequality the higher the management structure. I went through 6 or so iterations before being happy with my design; much of the time towards the end went on formatting, finding colours that work and faffing with sizing and labelling, things you think are quick fixes at the end, but are really crucial elements that make or break the feel of your design.

Here are the first couple of ideas I went through. Simple bars work well for this, reversing the female axis so the 0% points for each gender meet works great as you can see the spread of each management category really well. 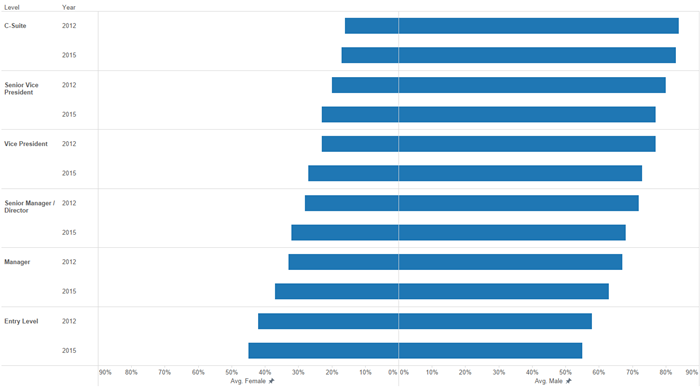 I thought there must be a more concise way to show the change between 2012 and 2015, so tried the Gantt bars as a form of bullet chart, but felt it wasn’t that clear. I then had the idea to put the 2012 bar in washout colours behind a bolder 2015 bar. This was to demonstrate the size of the shift, and keep the management hierarchy compact. I made the 2015 bar thinner so the 2012 bar still was visible in the background, that’s the only difference the size in the bars gives so I hope that’s not confusing.

After some formatting, I considered adding reference banding up to 50% in each gender’s section to demonstrate where true equality lies, but ditched it as I thought the original looks less busy and the story is pretty clear anyway.

Here’s the final version after about an hour’s work, click on it to see the interactive version! 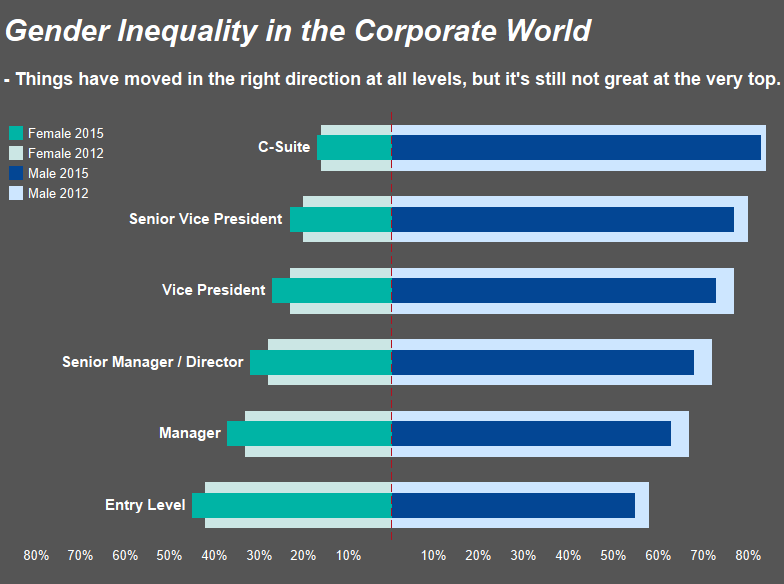 It was a really great exercise to do, and the added time pressure, although horrible at the time, actually does force you to make all those important decisions more quickly. This is something that goes completely against my nature! I’ve always liked taking my time to decide on the absolute best thing to do and have been very perfectionist in my approach. I’m now trying much more to go by ‘better done than perfect’ to avoid spending lots of time perfecting tiny parts of the work at the end. Timeboxing the whole exercise really enforces that concept strictly, so even if you feel your end result is a bit shoddy by your own standards, learn to forgive yourself for that, because with more practice, the output you produce under time pressure will improve!