A detailed breakdown of the session.

In case you missed it, one of the anticipated releases to come that was announced at TCish was map layers! If you’re anything like me, at the moment I rely on Mapbox with anything map related and then go into Tableau. Here’s everything we learned about map layers that we all have to look forward to.

Map layers were one of the most requested updates (no surprise) and has lots of great potential. We got to see some of its capabilities.

We were shown hurricane data that was presented visually through the connection of a shape file which is essentially spatial geographic data. It started out like this below but was very colourful and so with some formatting changed to this:

I was confused about where puppies and burritos fit in at this point but. After formatting the map to remove the black lines and turning off the tooltip, the puppy data set was joined. Specifically required:

When going to the sheet, there were holes in the hurricane map and so It required going back to change the join to a left join to see all of the hurricane data and puppy shelters that were affected.

To add the puppy shelters to the hurricane map:

After this step, another CSV was added and a new join calculation was made. This time it was BUFFER. This creates an area of a specified radius outside a point.

Again, as in the case above, the operator required was intersect. In this case, the left join works. The third layer was to be added – the location of the poblano stores. To do this:

Essentially, you can add as many layers as you want with marks layers!

Next, the calculated field above meant that we’d be able to see the radius 5 miles from a puppy shelter.

According to Tableau, this is simply the beginning and we have so much more to look forward to. Exciting news! 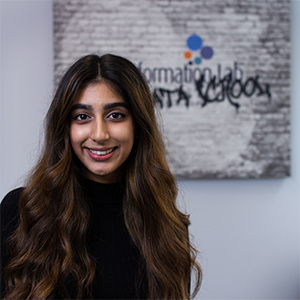 In TrainingLondon, UK
My Iron Viz Journey - NFTs: Art in the Metaverse and Digital Future