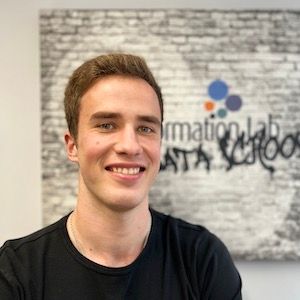 Originally a Lithuanian, Marius moved to England in 2017 to study his undergraduate degree in International Tourism and Hospitality Management at the University of Surrey. It was here where he first learned about Tableau. Even though interested in the tool, he decided to pursue a lifelong passion of his and applied for a digital marketing role at an international tour operator.

There, he discovered that the most interesting part of his job wasn't creating catchy marketing campaigns, but rather the analysis of what works and what doesn't. He enjoyed using data in email automation, personalisation and strategy development. After coming back to university and choosing a bunch of analytical modules for his final year, it didn’t take long for Marius to come across The Information Lab and pick up Tableau again.

He enjoys the interactivity and intuitiveness of the tool and likes to use it for storytelling, which goes alongside his other passion - he is an avid reader of National Geographic.

Whenever he has a chance, Marius enjoys a good Russian sauna, camping or spending time at his grandparents' farm. He also played competitive volleyball at high school, which he still pick up as a hobby whenever he can.