Today I sat an exam I wasn’t ready for, and it was the best thing I could have done

I’m a fan of pushing myself to do things that make me feel uncomfortable and sitting the Alteryx exam after 3 days at the Data School seemed like the perfect way to do that.

But why did I do this? Especially when I knew that I didn’t have a hell’s chance in passing and when I already felt anxious at the prospect of sitting it in 4 weeks, let alone after a few days? Why did I opt to spend my Saturday evening clicking through 80 questions online when I could have been at the cinema pretending I didn’t suck at Alteryx?

Easy. I once heard someone say that ‘the goal isn’t to be fearless; it’s to fear-less.’ Given that many of us fear the unknown, and even more of us fear failure, sitting an exam which would remove aspects of the unknown surrounding the exam structure and force me to fail, seemed like the best way to just tackle that concern head on. That way, I could spend my free time actually practicing Alteryx, rather than wasting time worrying about it.

The test allowed me to see what is holding me back and highlight my initial blindspots, not just figuratively speaking, but it literally told me what my blindspots were (see below):

So now I know what I need to work on in order to improve, which is amazing. And because I went into the exam with that mindset, when I scored a measly 54%, I may as well have passed. That was 54% closer than I was 4 days ago and that is all that matters.

Will I sit the exam again in 1 week? Damn right I will. And then the week after that, and the one after that? Yes. And I’ll do that until I pass. Do I care whether it takes me 4 tries or 1? Absolutely not.

We’re all going to get rejected and fail 98% of the time anyway, so we may as well just remove the fear about it happening, because it will.

I remember Michael Jordan once said in an interview that he missed 9,000 shots and he is one of the world’s greatest basketball players. Ted Williams, one of the greatest baseball players, averaged .406 in 1941; he is the last MLB player to bat over .400 in a season. That meant that while over 40% of the time, his bats were successful, the rest (i.e. 60%) were all failures. Everyone has failures. Learn from them, and move on.

It’s always easy to look back and feel confident with your decision, but I wasn’t confident re. my Alteryx knowledge throughout my first week of the Data School (or lack thereof). And I definitely wasn’t psyched about the idea of sitting the exam only to see my fail score.

It actually wasn’t until our third day at the Data School that I even opened Alteryx for the first time. Claiming I knew anything about what Alteryx did at this point, would be nothing short of a total lie. I didn’t know what a canvas or a tool was and If I’m being honest, I didn’t even know what Alteryx was.

The first couple of days of using the programme is best defined by a combination of ‘Wows’,  ‘This is cool’ followed by ‘Wait, what the-‘ and finally ‘Nope. I’m inherently bad at this’.

On Day One, DS18 were given a brief overview of a range of tools and told to complete a number of workflows. The only comparative analogy I can think of is being taught a few sentences in Chinese, and then being told you will be delivering a presentation in fluent Mandarin to colleagues in Beijing later that afternoon.  If I didn’t understand the basics of the language (Alteryx) how was I meant to speak it fluently (produce a workflow)?? This continued for two days and seemed utterly illogical at the time, especially when we were asked to design workflows with tools we hadn’t been taught. At this point, I frequently felt frustrated as I assumed I was the problem (either I missed the explanation or just wasn’t getting it).

Everyone in any given cohort learns at different speeds and levels. While from a rational perspective I am very aware of that, in my weaker moments I often felt like I was falling behind or questioned my own abilities. It was that standard mentality of ‘if everyone else is getting it, then surely I am the problem’. Except I wasn’t. I was just learning.

On our second day of using Alteryx a fellow DSer in my cohort exclaimed ‘The Alteryx exam is scheduled for 3 January!!’ Panic imminently set in as I desperately tried to calculate the days, hours and minutes I would have before I had to sit an exam in a software I knew nothing about.

Jonathan Sherman from DS11 had presented on Alteryx on our second day. After I mentioned to him that I was really struggling that same day, Jonathan offered to stay behind after work and help me and anyone else who needed it. He literally stayed behind for 2 hours and helped us go through a workflow. Over the next few days, Jonathan was always there, either in person or over Convo, to help with a workflow I was struggling with or to simplify and draw out ideas. He also encouraged all of us to sit the exam and kept repeating ‘practice, practice, practice’ [the Alteryx weekly challenges], the participation of which he creatively tracks on Tableau.

It was probably on Day three when it hit me that there was a method to the Data School’s mad way of teaching.  In the same way that language immersion beats traditional language teaching time and time again, Alteryx immersion makes for the perfect equivalent when it comes to learning a software; yes you’ll often feel dumb and get a lot wrong, but your growth curve will be way steeper than for someone who has been repeating ‘je m’appelle Gloria’ in a classroom for 2 weeks.

Now I’ve sat the exam (and failed), I can stop worrying about failing and spend my time more wisely, practicing.

With Jonathan’s and Carl’s support, my confidence in Alteryx has grown in just a few days. Already I can’t wait for my morning commute, so I can pull out my laptop and work on bettering my Alteryx skills, one percentage point at a time.

So I guess my tip for this week is to put yourself in uncomfortable situations i.e. sitting an exam when you’re not ready or simply asking for help.

Who knows, you may just pass. 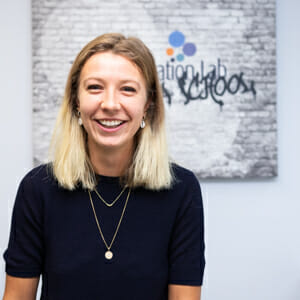