For our second day of Dashboard week we were given the task of visualising the New Orleans police body-cam data set. There was minimal data prep required but the data itself was limited. It only contained when, where and for how long each recording took place (and the size of the file recorded). This was an interesting start but needed to be supplemented to create something with a story. 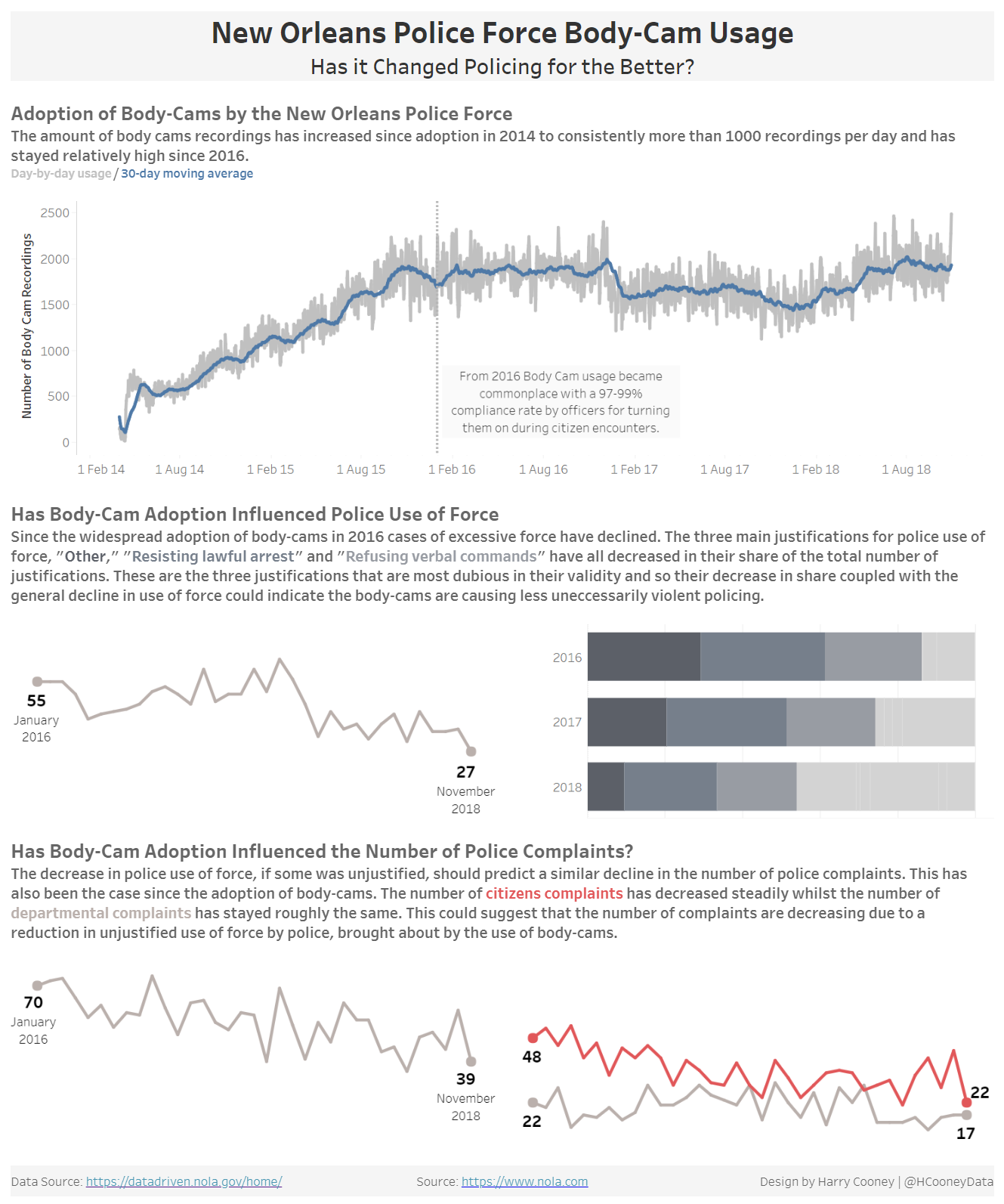 I spent most of the morning trying to find data sets to join to the original. The New Orleans police department release a lot of data sets so there was a variety of choice. I found a data set containing all the crimes dealt with by the police for each year with things like race and gender to further break it down. I tried to join this with the original body cam data set in Tableau Prep as there was a common ID between both files. However doing this caused a large amount of the body cam data to fall our and also duplicated lots of rows. It wasn’t the cleanest join and for the additional information provided it wasn’t worth the data lost. Going back to the search I was able to find records of police use of force and misconduct complaints. These could not be joined to the original data set but they could be used along side to tell a story. I wanted to investigate whether the increase in body-cams coincided with a change in use of police force and misconduct complaints.

I found that there was a decrease in in use of force and complaints which coincided with the increase in body cam usage increasing, with 2016 being the date I centred around due to it being the year they reached almost 100% adoption (source) and that the other data sets had complete data for. At this point I had three line charts and was unsure how I could make the dashboard look appealing with just these. Investigating each of the new data sets further I found further support for the idea that body-cam usage was the cause of the decline.

Breaking down the cases for use of force by year and justification it was clear that whilst the overall cases were decreasing this was not all. The proportion of justifications was made less and less of the same three which dominated when body-cams had just been adopted. This suggested that these justifications decreasing were the cause of the general decline. These three reasons were the only reasons in the data set for which there was no solid evidence that force was justified. “Other” which is dubious, “Resisting lawful arrest” which is likely justified but could potentially be used as an excuse for when there was no real crime but a use of force occurred, and “Refusing verbal commands,” which again is boils down to a he said/she said. This was therefore reasonable evidence for the argument that body-cams made police officers more accountable, and so caused a reduction in the cases of unjustified excessive force.

The reduce in unjustified excessive force would also predict a decline in the number of misconduct complaints, which was found, but more specifically there would be a reduction in the amount of complaints from the general public as opposed to from within the department. Breaking down the complaints by public against departmental (with another line chart) proved this to be true.

With the story constructed I was able to complete my Dashboard and format everything as I wanted. Find the viz here.