Us data school 11 students were given the task of sorting out messy excel based datasets in our first attempt at using Alteryx. Louise and I were given an IMDb dataset which had a column of rows alternating between the film title (and date) followed by the IMDb ranking (and number of positions it had changed). 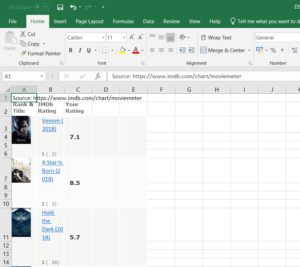 In order to use the data we had to separate these alternating rows into two separate columns. Here’s how we did it:

We connected a Multi-Row Formula to the loaded dataset creating a new field with title “Rank.” It had a value of “0 or Empty” for rows that don’t exist and was given the expression:

This meant that an extra column was added with a 1 for film titles and a 2 for IMDb rankings. (If the row above is 1 then you’re a 2, otherwise you’re a 1)

We connected to this another Multi-Row Formula. This too created a new field with the title “Join” and had a value of “0 or Empty” for rows that don’t exist. It was given the expression:

This was then connected to the Join function. The true data joined from the left on the “Join” column, and the false data from the right on the “Join” column. As the film titles and corresponding IMDb rankings had the same Join value the data was correctly structured with them on the same row but in different columns. We therefore successfully split the alternating rows into two separate columns.

After completing this (along with some other changes/formatting) we had a usable data set: 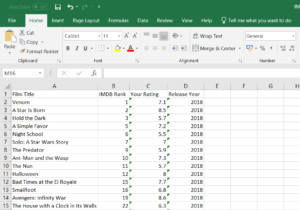