A Tale of Two Hex Maps

Week one in DSX was, for me, a short one. I had to miss days one and two, but hit the ground and attempted to run on Wednesday. I had an overview from Carl and my fellow Data Schoolers of the introductions I had missed, whizzed through the set-up of my kit and adjusted the straps on my bag, while everyone else finished off their board game task. I felt caught up in just a few hours…apart from anything Alteryx related, but that’s just a minor detail right?

Two days later, and Carl set us the task of revizzing one of our applications. We set about finding another data set to bring into our viz, prepping it with Alteryx, and improving our original in Tableau.

My original viz used the data on Bee Colony Loss from Makeover Monday’s week 18. Like a bee to…honey…I nipped across to the US Department of Agriculture’s website and found a neat little set of honey data, downloaded it and off I went. The data was pretty small but renaming and organising was a bit fiddly, because the hardest part was remembering what we’d been taught and what/where each tool was. I was just pretty happy that my workflow worked, even if it might not be the most efficient, but that will come.

Why do things in a few smooth, efficient steps anyway hey?

With Tableau open and ready to go, now it was just a case of working out how to create a Hex map. These funky little numbers standardise the size of areas (e.g. States) and allow them to be represented by uniform little hexagons. When mapping the US they help to eliminate the “Alaska Effect”, where Alaska sits way over to the North East of the rest of the country and means you have to have a much bigger map with lots of wasted space. Don’t take it the wrong way Canada, I don’t mean it like that.

Most importantly hex maps look like honeycomb, so if there’s one place they definitely aren’t clichéd it’s a bee viz.

One thing to be aware of when using hex maps is that they aren’t necessarily geographically accurate, and exact locations may have been adjusted to tessellate. So while Oregon and Washington share a border in real life, they don’t on a hex map. They’re also not always going to be appropriate where size of the area has an influence, where bigger states could support higher numbers of something…bee colonies for example, but let’s gloss over that.

Luckily, I still remembered the first step in how I had created a hex map: by Googling it. I followed the first link and set about following the steps here, which creates a scatter plot of the co-ordinates for each State. It felt a bit different to when I used hex maps for my original viz, but I assumed it was just that I’d forgotten how to and carried on to create the maps.

The issues arose when I attempted to place a series of these hex maps on a dashboard and had to then spend what felt like forever re-sizing the maps and the hexagons so it looked like more like the US and less like an elephant. 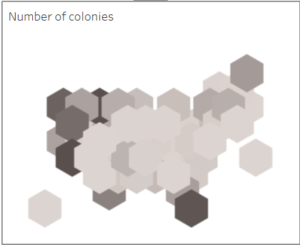 In my original viz, I had created the hex maps using a spatial file helpfully provided by VizPainter. This creates a map sitting somewhere over West Africa, but washing out the background allows for map-like interactivity with zooms and panning, whilst avoiding any issues with re-sizing. 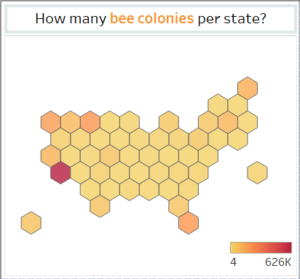 And the Hex Map

The finished result is up on Tableau Public here. Lessons learned: you don’t have to try to re-viz entirely from scratch, try to remember what you learnt last time, and don’t always use the first link.