Three down, two days to go and our task for Thursday was to create an app in Alteryx which allowed the user to specify five locations from the COORD Bike Sharing API, then visualise the data in Tableau.

We were allowed to work as a team for the app, so the work was split into two to focus on the two APIs involved in the app. I worked on getting longitude and latitude from the Google Maps API along with Kirsty and Conrad (AKA Team Teal, thanks for letting me be an honorary member for the day).

We created an app that, in very short, allows the user to input five search terms, appends the city and state name and knits that all together with an API call. You can see below the five text box tools which feed into the URLs in the text input. The upper part of the workflow show the process we used to turn the list of bike locations which the other team had given us into City, State to append to the search. We did this to ensure it was more robust, so a user could search “Main Street”, but our app would add “New York, NY” (or which ever drop down the user chooses). 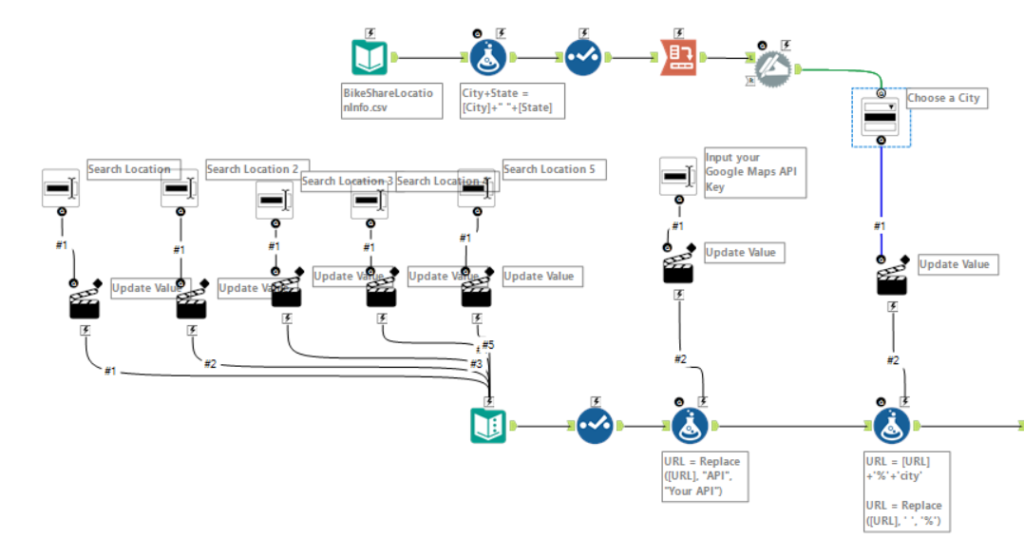 The nice thing about working with the Google Maps API is it allows you to keep track of your usage very easily with the output below. This means no crashing or overloading of APIs, thankfully!

We requested geometry only, meaning the call returns a succinct result, the first two lines of which are lat/longs. Parsing this out involved some fiddling around to remove the % signs we’d put in for the call, and a single cross tab to output it in a format for the other group to use.

Once that was complete, we each chose a city and found the bike stations from that city to visualise in Tableau. Andy had tasked us with trying out some of the new features in 2018.3, which I think we were all pretty excited to get our hands on after the last few days! My creation was made to be optimised for phone, which can be seen below, and can be found here. 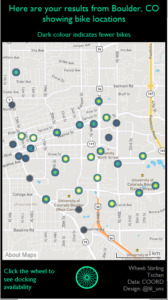