Last day of dashboard week! Continuing on with the space theme established earlier in the week for me, today’s dataset was a subset of NASA’s meteorite fall data.There were no preparation in Alteryx needed for the core requirements (as Tableau does pretty well with simple JSON file) though some people did go down that route. First however, a gif which I took out of my original dashboard, which because it’s Friday I’ve taken the liberty of putting in very questionable font and colours.

The last meteor strike to cause significant damage, a pretty big rock hit Chelyabinsk, Russia in 2013.

For some reason the first idea I had when mulling this over was from Goldeneye, which features some large telescopes but also in the Severnaya scene, a large map of the Earth (for a satellite integral to the story). This put black and gold in my head and it was all downhill from there. As the font I ended up choosing isn’t supported on Tableau Public, a screen shot of it is here; 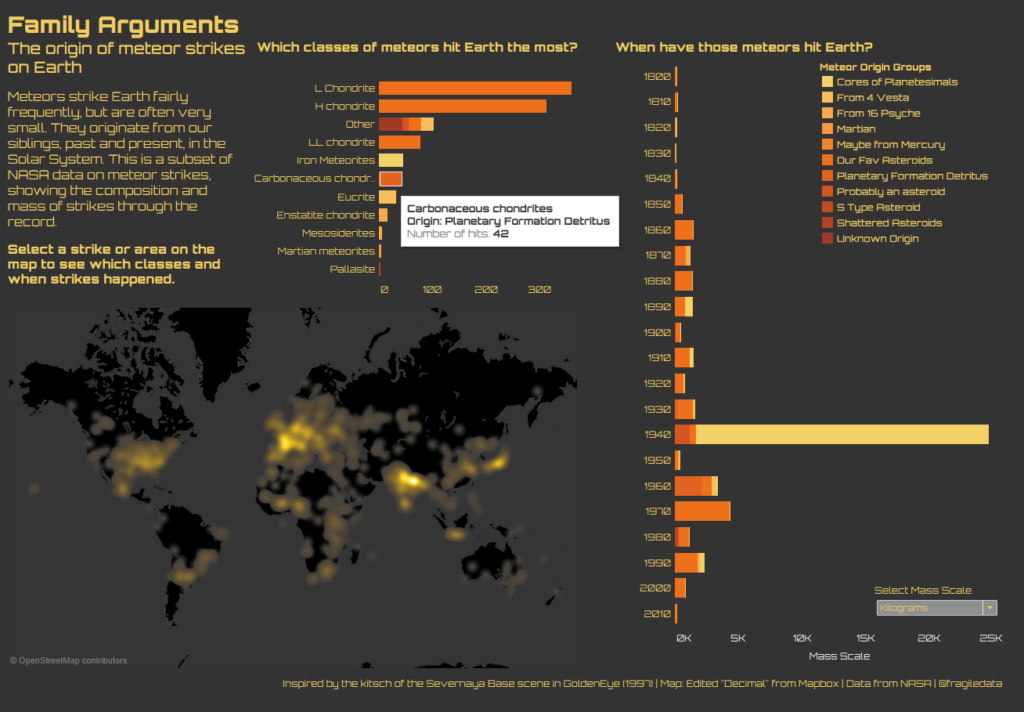 No, it’s not your eyes this time either.

The inspiration for the story and data classification came soon after looking up what the classifications meant, as the mineral spectra of meteoroids is compared with what we can ascertain from our observation of other bodies in the Solar System, which is mostly where these objects came from (mostly asteroids, but also the Moon and Mars). Asteroids are often named in families, but also we have historically named objects in our solar system from various cultural pantheons, which themselves are often families.

The density map is a new feature in 2018.3 which a lot of people have been enjoying, here showing a concentration of hits in Europe, South Asia, East Asia and the United States – this makes sense as the data is provided by NASA and meteor strikes can be surprisingly political events due to the opportunity for advancing knowledge that they present. The bar charts along the side make use of the groups which I created, and neatly learning from Nick that you can make hierarchies of groups (though this isn’t the best use case for it).

You can see the final version in Tableau Public here.

My original map was black, yellow and green for the sea (picking battles in 2.5 hours) but feedback from Andy rightly suggested ditching the green to help the colours pop better from the density map. However, after trying for an hour (!) including manually deleting my map tiles cache, I couldn’t get Tableau to load an updated version of the map as changed in Mapbox, which also foiled Lily yesterday. If anyone has any ideas on this which are not deleting the cache or reverting to a previous version of Tableau (though it worked for Ravi) then please let me know via twitter!