Keeping the Alteryx workflow in order

For the first DS5 client project I was tasked with building out the Alteryx workflow to load four data sources and perform the necessary joins and data transformations at the end of which a .TDE file would be produced with clean data that could be used as a source for the client dashboards.

What I learnt from using Alteryx on a project for the first time:

One tool can perform several tasks

Initially I had been placing Select tools after joins to remove fields from the workflow, change their type or rename them, however, the Join tool can also be used to perform these tasks in addition to joining data sources.  This reduces the number of tools in the workflow thus making it easier to understand: 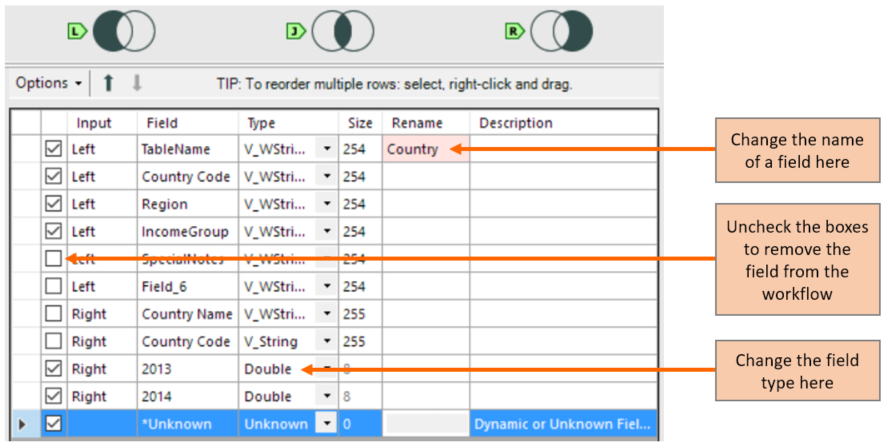 Towards the end of the week, there was time to tidy up the workflow, align tools on the page and untangle some of the connections.  This made the workflow much easier to follow.

Top tip: to horizontally align a number of tools in the workflow, first select all the tools to be aligned and then press: Ctrl+Shift+-  (the third key is the minus key “-“).  To align tools vertically, press Ctrl+Shift++.

A comment can easily be added to each tool using the Annotation icon on the left hand side of the configuration window, as shown below:

These can be sized to enclose all the corresponding tools that the comment refers to and, if desired, colour-coded to more easily identify certain groups of tools, such as all Joins or all Input Data tools.  This can be seen in a screenshot of the final workflow below:

It’s still early on in the journey of leaning Alteryx, but I’m starting to appreciate how powerful this data analytics tool is.