For the Data School application I was given a dataset containing meter readings for a variety of buildings across London including: 10 Downing Street, Great Ormond Street Hospital, Tate Modern and a number of Parliament buildings.  There were a number of issues in the data:

After probably spending too much time thinking how I could work with all the data as it was, I decided to focus on a subset of the data for the 8 parliament buildings where the data was in decent shape.  There were some seasonal trends for the different utilities – usage of gas peaked in the winter months (presumably for heating) and electricity peaked in the summer months (presumably for air conditioning).

To find more insights I blended in the number of occupants for each building along with the unit cost of electricity and gas per kWh.  This enabled the cost of energy per person per year for each building to be calculated, which highlighted two outliers.   Finally, a table shows what cost savings could be made if these 2 building cut their energy usage. 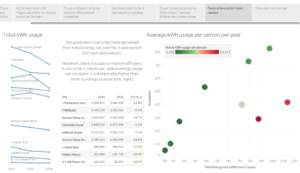 Considerations for the makeover:

For the makeover I decided to focus on a single message – there were 2 buildings using a lot more energy than all others and annual savings of almost £12k could be made if energy usage was reduced by 5%.  The viz was reduced to one slide with a more visual theme.  Larger titles and hey highlighted numbers were used: 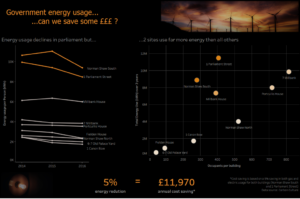 While it loses the interactivity, I think the single image is more impactful and would hopefully be more engaging for the viewer.