Dashboard week is almost done and dusted with, and I will absolutely look back on it with fond memories. It’s been variable, and I’ve struggled at times, but I’ve also really enjoyed the creative freedom that we’ve had to just make things. It’s awesome! The condensed time frame really helps you to focus the mind, and to accept imperfections. It forces you to edit and be decisive about what you’re doing, but also gives you enough time to iterate and improve. I’ve tried to be more proactive this week about asking Andy for some bits of general design feedback, as well as the usual ‘help, it’s broken’, and have also shared opinions with people around. It’s been a very productive week for us, and I’ve enjoyed it. To wrap up the blog series, I’d like to briefly comment on my biggest struggle and favourite aspect of the week.

The Biggest Struggle: Data prep. At times this week it felt like everybody else has raced ahead of me during the Alteryx phase of the projects. I don’t think I’m terrible at Alteryx, but I’m certainly not the fastest, and fundamentally there’s still just so much that I don’t know. When we were scraping data from cheese.com yesterday I was heavily reliant on support from the people around me. If George hadn’t pointed out the ‘Parent’ feature of the XML Parse tool to Steph, she wouldn’t have been able to share that knowledge with me, and I would never have found that out. The only saving grace of the data prep aspect is that I’ve contributed a couple of fun regex solutions. I suppose the positive spin on this struggle is that being in a room full of smart people is a great way to learn through shared knowledge.

The Favourite Aspect: Freedom to create for ourselves! I love this. Today’s dashboard was about Star Wars. Now, I’m not a Star Wars fan, and I don’t know very much about it at all, but I was able to just focus on something I know: disapproval. So, which American demographics hate The Phantom Menace more than anybody else? 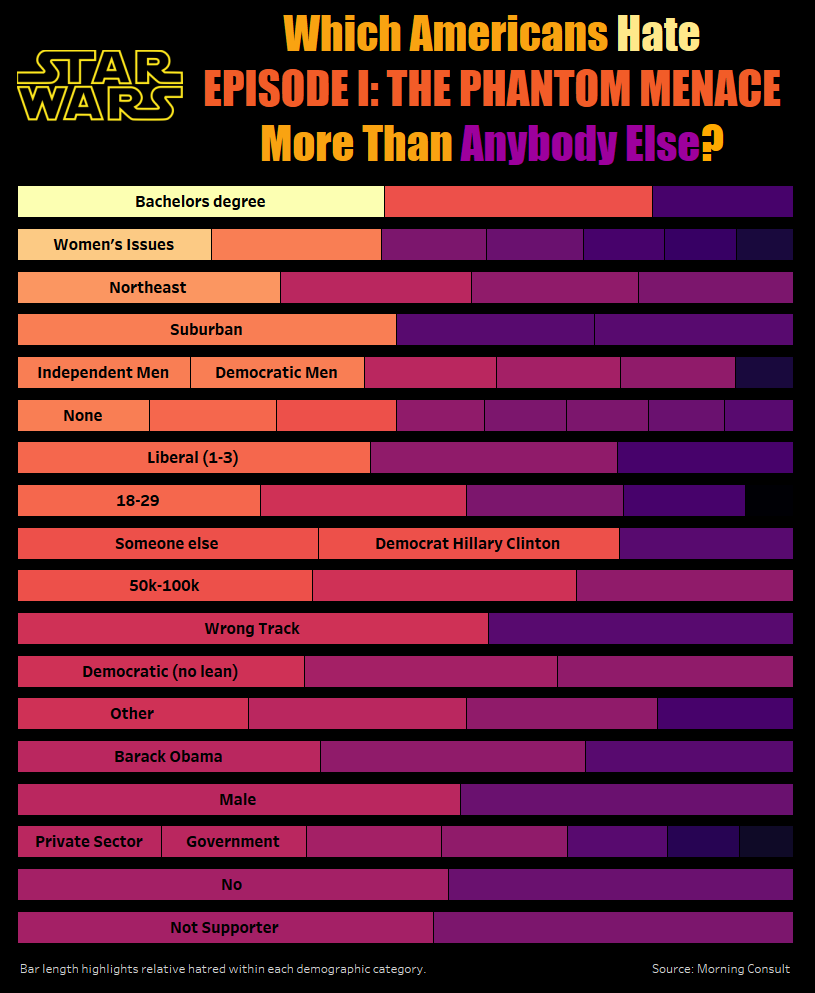