This morning marks the mid-week day of our dashboard week and I was feeling just about comfortable with the format: understand the data, clean the data, explore and visualise in Tableau. However, Andy threw a curve ball in this morning and one of the rules for day three was to use Power BI and not touch Tableau at all! I did mention yesterday that I wanted to specifically learn something I didn’t know how to do, everyday this week….and learning Power BI definitely falls under this category.

The data we were using was nice and clean –

In this post I’ll talk through how I approached today and will give my first impressions of Power BI. As I’ve only spent one day on Power BI I don’t feel I can do a full comparison yet, so I plan to write a more detailed comparison later over Christmas.

The first step I took was to look through the Power BI tutorials, both the introductory YouTube video and the Getting Started page. This helped me load the data and start creating a few more exploratory chart.

Inevitably when I first started I kept making comparisons between Power BI and Tableau. This meant that I quickly became frustrated because I knew what I wanted it to do but didn’t know how – which was the whole point of today.

Once I thought I had a basic understanding of building a report in Power BI (charts and formatting), I took it back to basics again and explored what I actually wanted the dashboard to say. I drew on a few post-it notes and sketched out various designs on paper. This helped me focus and I decided I wanted a sort-of KPI dashboard that gave an overview by year of the total amounts given, to and from who. 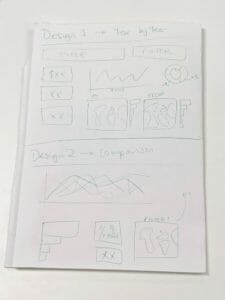 A quick sketch to focus my analysis

I think that I’ve been so Tableau focused over the last 3 months and have never used Power BI before so I really wasn’t sure what to make of it. But, I have to admit that I’ve so far been relatively impressed by Power BI.

There are a few things, straight off that are a bit more intuitive than Tableau:

However, there are somethings that I really missed from Tableau:

So that’s my quick, one-day of use impressions of Power BI.

I’ll do a more deep blog with pictures in the next few weeks, but I think that Power BI definitely has it’s uses – though potentially more as a reporting/ KPI dashboard tool, rather than the true data exploration and visualisation that Tableau gives.

See below for a picture of my final dashboard or click here to see an interactive version where you can flick through the years. I went with green as my highlight colour as the majority of donations were monetary. Green also stands out against the grey background – chosen in an attempt to make the maps look nicer! Let me know what you think! 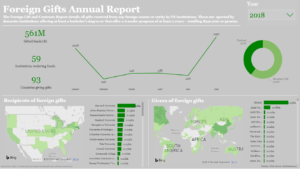