DS11’s dashboard week day two started out well, as the data was relatively clean and could be viewed straight in Tableau. A good deal of my time today was working out what I wanted to say, as well as how. Then it was a ‘simple’ case of putting it all together in Tableau!

Yesterday, I ticked off transparent containers with a moving background (see my snowy, viz here), and before today I hadn’t ever created bump charts! Therefore, I think I may make it my mini-challenge this week to tackle something I’ve not done in Tableau before each day!! As if data prep and a viz-a-day wasn’t enough!

Another day survived in Dashboard week!

The data we were using, as well as the additional tables I downloaded from the same website, were relatively clean so in terms of data prep there was very little to do. See Andy’s blog here for the full intro/ today’s rules!

The most ‘labourious’ task was to filter out down the original file that Andy downloaded, but I did this in Tableau using a database filter. I filtered out some null values, which I saw using Tableau Prep’s cross field highlighter were related to nulls in the other columns. I also filtered out any videos that were labelled ‘Test’, ‘Training’ or ‘Accidental’ as these clearly were not actual use cases.

I found two extra data types to give more context about police activity in New Orleans:

Data Prep in Tableau Prep and Union-ing in Tableau

This was a big challenge for me today, as the data was relatively descriptive and I struggled a little with the ‘So What?’ that every visualisation should have. I employed Caroline Bevon’s Data Visualisation techniques (see my write up of DS11’s session with her here).

I first wrote out what data I had from my three data sources on three coloured post-it notes. I then organised these onto a sheet of paper, discarding some that were out of scope. 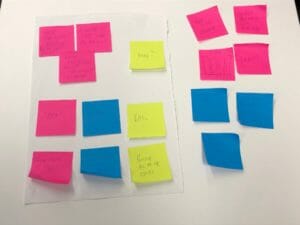 Next, I drew out more exactly how I wanted the data to look – complete with mini-bump charts! 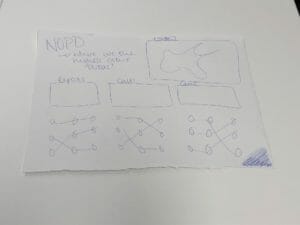 Drawing out my dashboard before Tableau

Finally it was a case of pulling it all together in Tableau. I used a blog by DS8’s Gauthier on Bump Chart’s to help me learn how to create them!

And voila, my final viz can be seen below or interactively here! 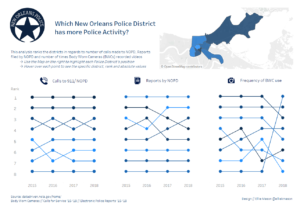