Dashboard week has begun! And we are off to a strange start with the “Fuck Off As A Service” API. The FOAAS API is documented here and it essentially allows you to call the API to request a specific way to say “fuck off” with some customisation in there. APIs allow you to enter a url into Alteryx (other programs are available) and get something back, some APIs are quite interesting and might give you crime stats surrounding a certain coordinates or give you drivetimes from place to place. But not this one.This one just spews profanity.

So an example of a call to the API would be “https://foaas.com/you/andy/gheorghie” and that would return ‘Fuck you, Andy. – Gheorghie’.

Just to clarify, during dashboard week you create an alteryx workflow, a tableau dashboard and lastly a blog. With FOAAS the alteryx workflow is pretty obvious, make a workflow that calls the API. My workflow calls the API for a list of all commands and then inputs those commands into separate API calls and then lastly cleaned it up and separated each word into it’s own row so I could get a word count.

The only significant challenge I faced was in attempting to get the API to return the output in a JSON format – as that’s what I’m most familiar with when it comes to APIs. The documentation for the API is… not the best… and I couldn’t quite workout the URL call I’d need to get it in JSON form, so I used the ordinary HTML output and used regex parse to get it cleaned up very quickly. I wasted a lot of time trying to get it into JSON when I really shouldn’t have. I finished early anyway, so no worries there.

You may think that you can’t imagine a good way to visualise the output of an API that tells you to “go fuck yourself”. Well nor could I. To call what the API returns “data” is strong wording indeed. So this is my valiant attempt at visualising the… output. 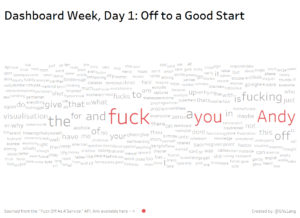