Today we used the Coord Bike Sharing API to generate the locations of bike stations around chosen landmarks. The Coord API is thankfully pretty easy to use and we complemented it with the Google Places API that allows you to input a place name (as though it were a search term) and get a lat/long as the output.

We produced an Alteryx app that allows the user to select a city (and state) and up to 5 landmark locations. The city(w/ state) is then effectively appended to the landmark search term, put through the google API – which generates lat longs for each landmark. Those landmark coords are then feed into the Coord API and we get a bunch of info on the stations within a specified distance and the pricing as well! 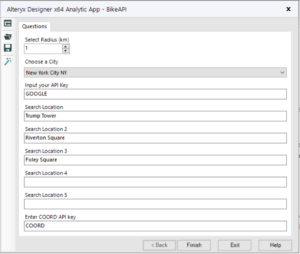 No one was involved in the creation of the entire app and boy was it a struggle to quash bugs individually. But it worked out relatively okay in the end.

Big issue with this whole system is as far as I know there’s not a Alteryx Public to host the Alteryx App to allow the whole thing to work as a single unit so the Tableau Public that I created is more of a proof of concept on what you get out of the Alteryx App. They are united with the right licenses but oh well. Oh and I optimised it for a phone/tablet, which is a first for me…

Would have been nice to add some more info in there and perhaps give distance from each searched landmark to each found station but oh well – ain’t no one got time for that (no one in DSX was able to produce such functionality).

Anyway that’s all from me folks. I’m going to sleep now.