Anyhow a very simple one today as we had far less time, I could have taken the json right into tableau but I did a little bit of cleaning and “data exploration” in alteryx first. Looking through the data I noticed a massive surge in mass of meteorites in the year 1947. At first I though it might be a data error as the difference in in the thousands, but I looked at the meteorites of that year (in the data set) and found that the culprit was one “Sikhote-Alin” of 23,000,000 (grams). I looked up Sikhote-Alin and it was indeed a bloody massive meteorite, the largest in fact in recorded history. 1947 was a good year for meteorites.

I built my entire dashboard on this meteorite nugget of analysis but I threw in a set action (which is effectively an ordinary action, but don’t tell Andy – does he still read these?) and a bit of the ol’ transparent sheet – both new to 2018.3. I was actually very happy to see transparent sheets. 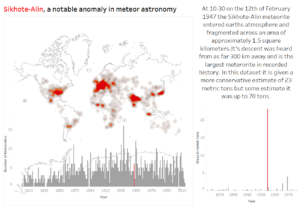 So. That’s all from me for this week. I am going to now sleep lots and play some Red Dead Redemption II in my few waking hours. Ah the luxury of a cold.