My first week at DSX: Board games and Alteryx

Yesterday was my second day.

Yesterday was when the work really began.

In my wisdom I told Carl about an online database that I thought might be worth scraping and playing around with to make a dashboard. This was a mistake.

I enjoy board games, I don’t hide that fact, and I’ve been a member of BoardGameGeek.com for a while now. It is an exhaustive database of pretty much all board games ever manufactured with over 100,000 entries. ONE HUNDRED THOUSAND BOARDGAMES. Only like 40% of them are editions of Monopoly. That’s not true… at least I hope that’s not true… 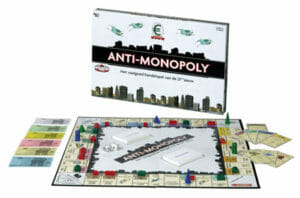 Speaking of awful board games, there are good board games, and BGG.com users have voted since 2000 on every damn board game there is. So, let’s look at the top 100 and see if we can answer a question in a dashboard, using both Alteryx (to make that data pretty) and Tableau (to package that data nicely).

As you can see, this is my workflow. I took out dead hyper links, removed special characters, crosstabbed that pricing data to make it more palletable and just generally sorted it all out with what little Alteryx skill I have (I’ve only been using it for like 3 hours).

I’ve put it on tableau.public so you can have a look! (It’s a pretty simple one, but I did do my little logo and hyperlink trick in the bottom left, so maybe I’ll talk about that in future…)

So what is that question I mentioned earlier? Well… 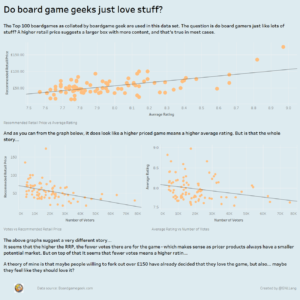 It’s not my finest work but Carl wanted it done in an hour!

Hopefully my next dashboard will be more glamorous!