Our first day of Dashboard Week was Survey Data from the Design Consensus. We had to download an Excel file which contains 40 different questions from 9429 participants about their career in design.

After exploring the data, I thought about creating a dashboard based off salary.

To analyse the data in Tableau, it naturally required some data preparation.

Tableau likes data long and thin, some columns that I wanted to analyse were in one long field. Such as this one about the benefits each designer had as part of their job:

I therefore wanted to split this out, putting all separate benefits in the same column on multiple rows. So that I could analyse each separate benefit each designer had.

I used Alteryx to achieve this. I used the Text to Columns tool and then split it into rows.

This would duplicate the data because it is creating extra rows for the same designer. To help solve this future issue on Tableau I created a Record ID at the start of the workflow so that each row was linked to the individual designer.

As you can see from above, there are now multiple rows from the same designer (Record ID = 1), for this reason there were now over 3,000,000 rows of data, compared to the original 9429. If we did a COUNT(Record ID) on Tableau it would give us an incorrect number, for this reason I would use Count Distinct, so that it didn’t create a ballooning issue with the data.

This was my final dashboard. My 2 main charts are the top charts; hence they are bigger than the bottom chart. I made Males a blue colour and Females red. I also put Males first because they appeared first in my chart titles.

The last task was to edit my tooltips from the default version. I excluded the Command Buttons, I also used a calculation so that in the tooltip Males would be blue and Females would be red.

Now to publish this blog before 5. 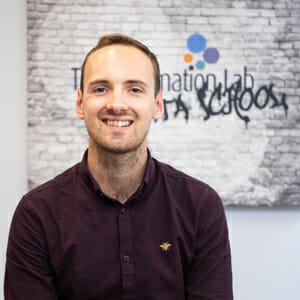 In TrainingLondon, UK
Reflections from the Data School