Andy didn’t call in to set us today’s task, instead it was through his blog post that he released the details of his plan. Turns out it was to make Tableau v9 look good, because today we worked in version 8. At this rate maybe we’ll be in Tableau -1 by Friday (or hopefully, as Louisa says, pasta shapes).

Our task was to download traffic data from the UK Department of Transportation website, each choosing a specific region. Alteryx wasn’t too painful, although I did have to go back in a few times to add in things like the date, which wasn’t being recognised properly by Tableau.

I chose the South West as my region, because that’s my neck of the woods. As anyone who watches BBC Points West knows, there’s a been a debate going on for years over how to relieve the traffic on the A303 around Stonehenge, with current plans involving an underground tunnel to replace the road. I was pretty excited to see if I could find any interesting insights around this, but getting excited was almost as far as I got.

I do, however, have a list of my top features which I had taken entirely for granted but which Tableau 8 lacks:

Not being able to use spatial files, or even connect to data which contains spatial files (also a problem in v9, I think spatial capabilities came about in 10.2).

Not being able to move a map by clicking and dragging. Happily, David showed me that all I had to do was hold down shift, but that was around 16:30, having already had multiple hours of not being about to.

Can’t turn map controls off – not a massive issue, but another vague annoyance.

Can’t drag and drop dimensions and measures into calculated fields.

Can’t work out the Table calculation interface – what?

Basically can’t do much with sets and groups from what I could work out (couldn’t be further from set actions!)

LODs – probably can’t include these in a list of my current favourite features, but you always want the things you can’t have.

And finally, the pièce de résistance: not being able to publish to Tableau Public. For my eyes only then.

Below is what I’ve concocted so far, in the aforementioned “Presentation Mode”. Quite something hey. 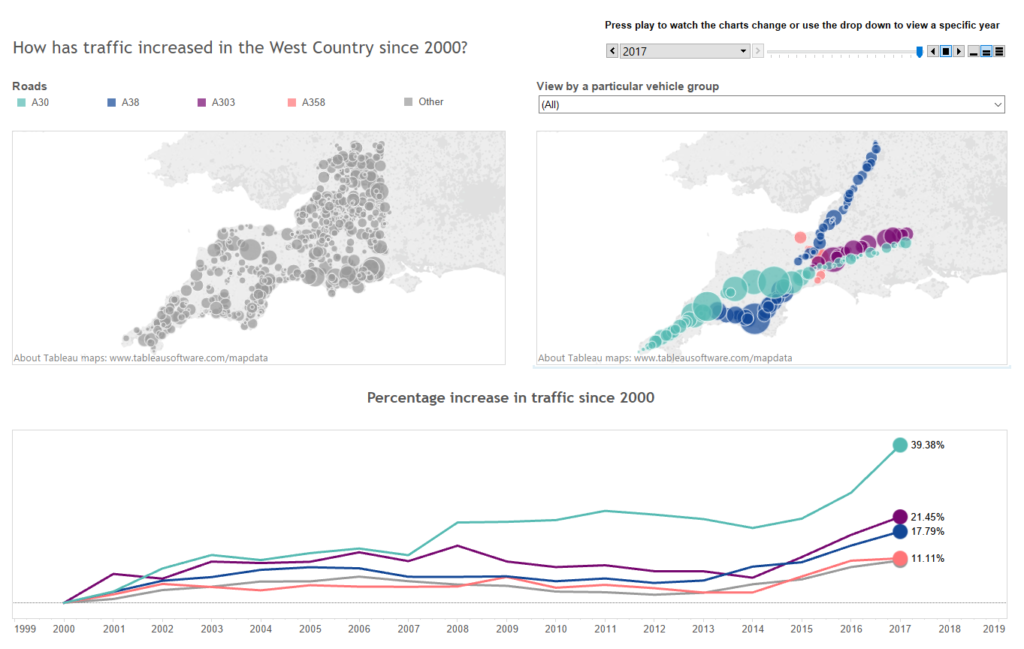 Andy’s plan might have been for us to find work arounds, but what he didn’t consider was the work around of just not using things. Please Andy, if you’re listening, we’ve learnt our lesson: We will never take these features for granted again. Let us back into 2018.3.