Using Tableau’s Superstore as the database, the SQL query:

creates a table with column headers Region, Order Date and Sales, where the Sales is the sum of sales for each order dates in each region and outputted as: 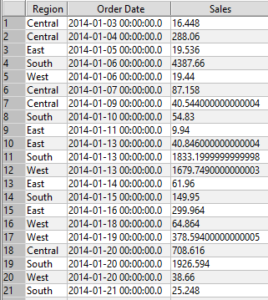 In the SQL query the ‘Select’ brings back the data that is needed from the database, the ‘as’ following the aggregation of a measure names the column it will fall into, the ‘From’ tells SQL where to pull the data from and the ‘Group By’ is the level in which the measure is aggregated to. This table can be displayed in Tableau as: 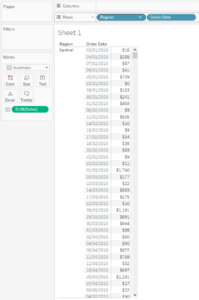 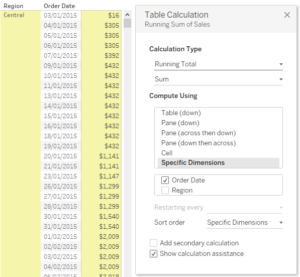 To do the running sum in SQL we have the query command:

Sum(Measure) over (Order by Dimension)

and to add in the breaking up running sum by Region we use the ‘partition’ command:

So in order to get the same running sum as in Tableau we use:

Which then returns the table: 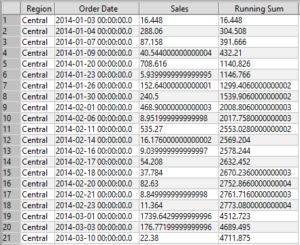 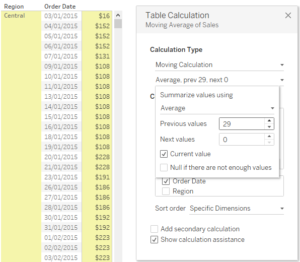 For the SQL query we use is similar to the query before however the first Sum becomes Avg and the number of entries averaged over needs to be given. To have a 30 point moving average as before the brackets following the ‘Over’ needs to include ‘Rows Between 29 Preceding and Current Row’; this is saying take the values from the previous 29 entries of the Order Date and the current value and average their measure. This gives the command:

Which then returns the table: 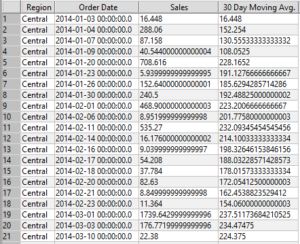