Each Friday, our coaches ask to present a project which relates to the content we have learned over the period of the week. This week, our task was to supplement our application visualization with additional data. This task helped us to revisit the major topics of the week: Data preparation and joins in Alteryx.

The topic of my original viz is the political landscape in Uganda: 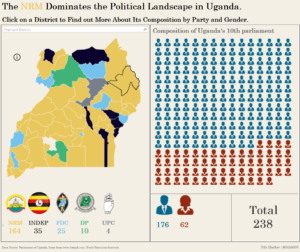 The map on the left side of the dashboard shows Uganda’s districts and is colored by the party which holds the majority of parliament members in this district. The mostly yellow colored map shows that the NRM (National Resistance Movement) dominates the political landscape in Uganda.

The right part of the dashboard shows the members of the 10th Ugandan parliament. By hovering over the icons the viewer can retrieve information about the name, district and party of the respective parliament member. The icons are double encoded (color and symbol) to show the gender distribution of the parliament. About 1/3 of Uganda’s parliament members are women.

The additional data, I gathered for this viz, is GDP per capita in US$ and GDP in Million US$. By enriching the original viz with this data, I can show which districts are considered as relatively wealthy or poor. I also might draw some careful assumptions about which party appeals to higher or lower income groups.

The data set I found which provided the GDP data I needed is here: https://pardee.du.edu/sites/default/files/Es

I came up with the following workflow to prepare my data:

The workflow works the following:

After joining the additional data on the district field in Tableau, I have now all the data needed to created the visualization I want: 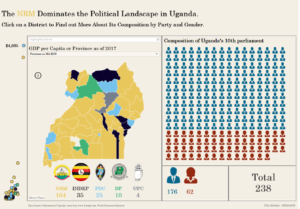 The additional GDP data is visualized by the scatter plot on the far left side. Each point represents a district. By hovering over the data points, the respective district on the map is highlight and vice versa. The parameter above the map lets you switch between the two measures GDP per capita and GDP in Millions.

To confirm this hypothesis, I would have to dig deeper into the data or maybe even find additional data sets. 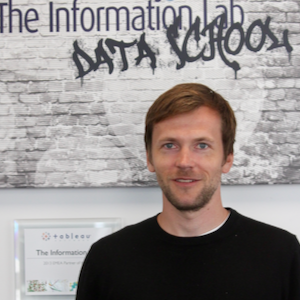