The other day DS8 were let loose on #WorkoutWednesdays. We each had to pick a different week’s workout and try to get through as many as possible in two days. If you haven’t tried any WorkoutWednesdays I can’t recommend them enough. They can be extremely frustrating at times, but they teach you an enormous amount about Tableau, and we implemented techniques learned from these days immediately into our client projects.

In this blog, I’m going to walkthrough and explain the calculations required to make Week 41’s dashboard. This uses worksheet actions to allow the user to see Sales by Profit for all US States, and then click a State to see the Sales by Profit of all the Cities in that State. If ever you have a two level hierarchy of data, then you can use these Calculated fields (replacing the measures and dimensions for your own) and have the same effect.

If we start by making the simple scatter plot showing Sales against Profit for all the States, then hopefully it will be easier to think about the calculated fields we need to make. 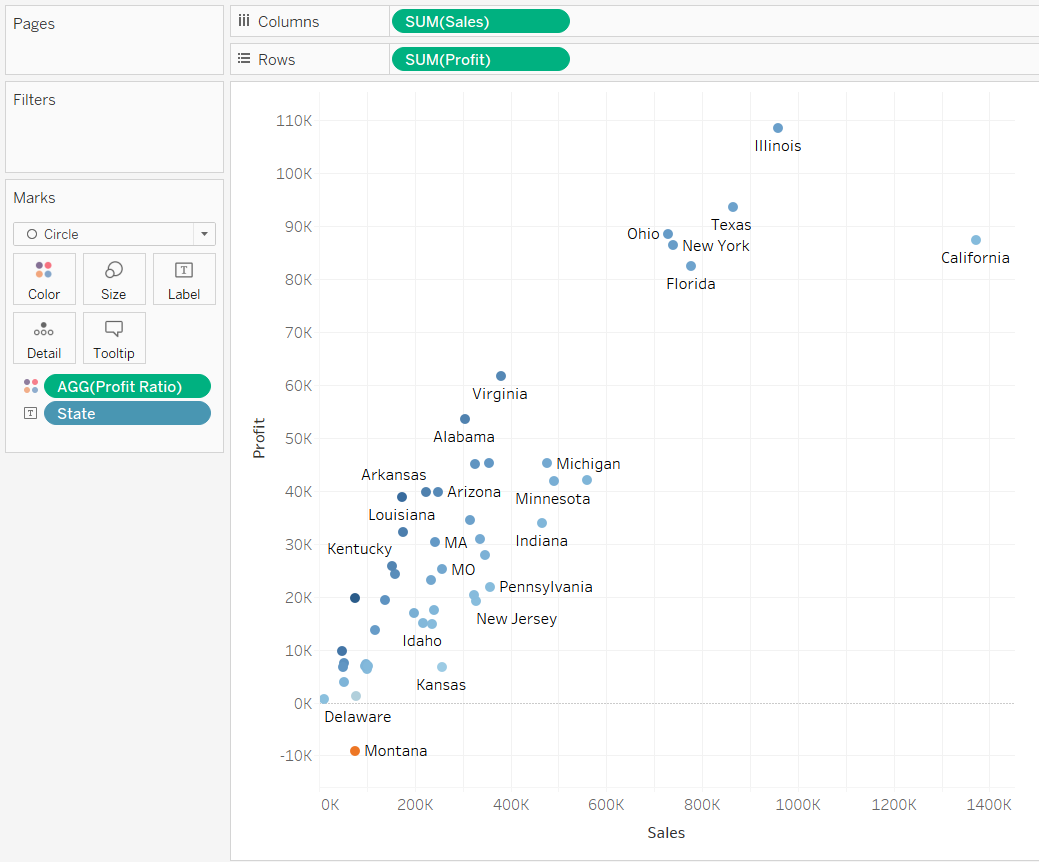 However, we know that we will need both States and Cities on detail in the end. If we add Cities to detail then our chart updates and looks like this (which is not what we want). 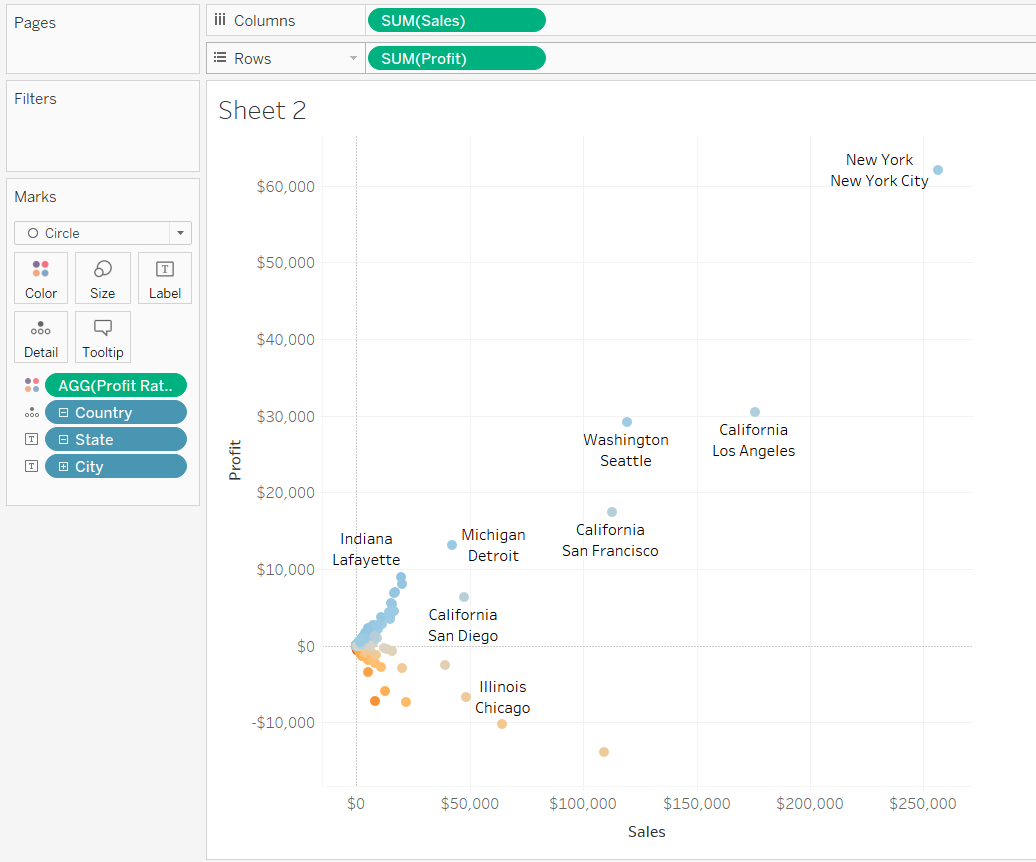 To fix this our first step is to replace our measures (SUM([Sales]) and SUM([Profit])) with new ones. As we will eventually need both States and Cities on detail, we need to write a calculation for both Sales and Profit which returns the State level values or the City level values depending on how many States are in the view. So when we filter down to one State with a worksheet action, the view updates and shows the City scatterplot.

Let’s break this down line by line.

If the number of States in the dataset is not the same as the number in the view, then give me the sum of Sales at the lowest level of detail – in our case per City.

If you replace [Sales] with [Profit] then you have your new Profit measure and our scatterplot is almost ready. If you swap the old measures with the new, you’ll end up with this: 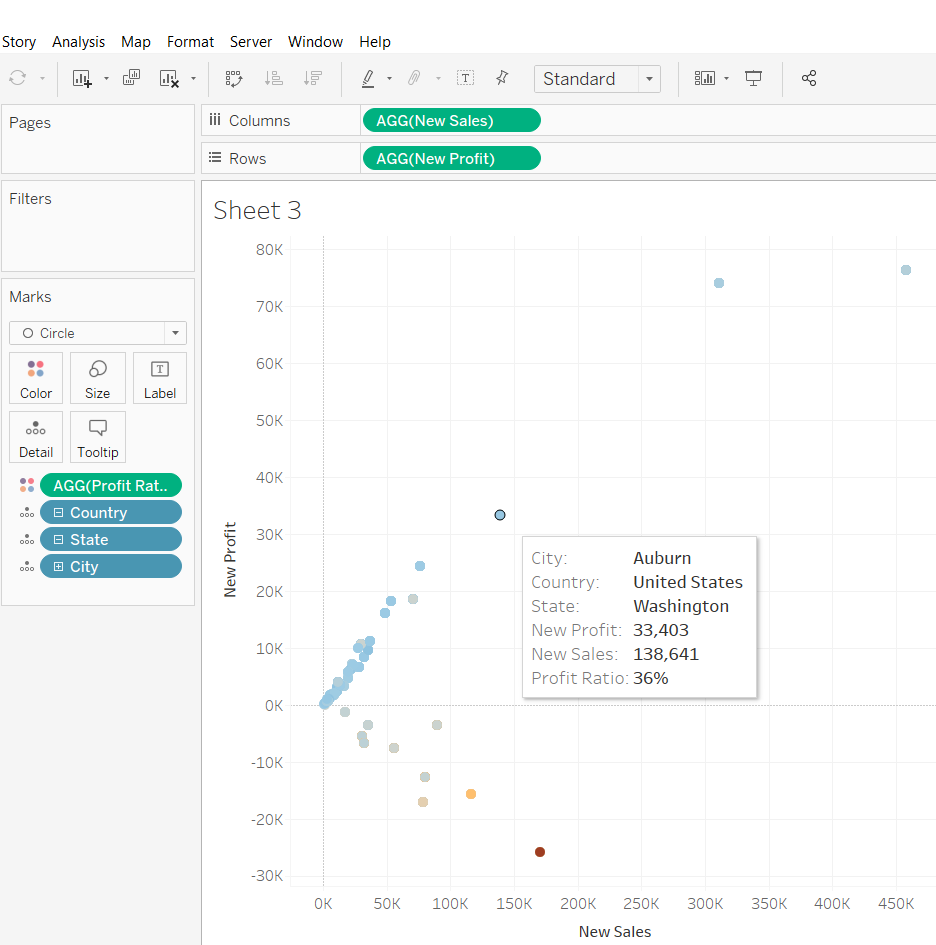 Our dots are in the right place for the State level, but the colours of Profit Ratio are wrong, and if we hover over a dot, then we see that there is City information being shown, as well as State. The final clue that something is wrong is in the bottom left of the screen:

Since there are 48 States in the dataset, we should only have 48 marks in the view. The fact we have 604 means that Tableau is piling a dot for each City in a State on top of each other at the State level Profit/Sales position. There is still work to be done…

To make sure Tableau only returns one mark per State we need to write another Calculated field. This one is a bit of a monster so thanks to Andy for showing me the way.

Let’s break this down bit by bit again starting with the nested LOD equation:

Finally, if neither of the two above conditions are True, then we return False. The only situation which will return False is where we have every State in the view, but we are not looking at the City with the highest Sales. If we drag City Filter onto the Filters shelf and only keep the True results, then when we are at the State level, Tableau will only show us one mark per State. 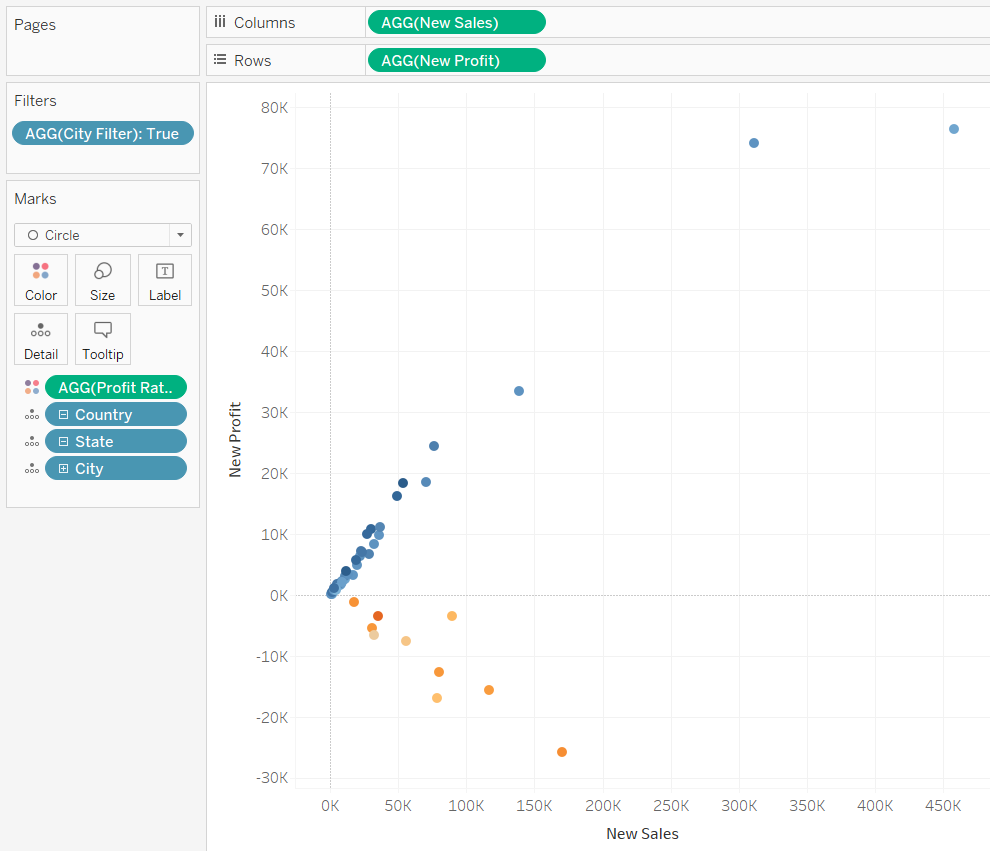 Next up we need to tidy up our presentation. We want to label our marks with their State/City depending on what level we are at and have a Title and subtitle telling our viewer whether we’re at the State or City level, and to drill up/down to go to the City/State level. To do this we need 4 calculated fields, but they are all doing essentially the same thing.

First up, let’s fix our labels:

Next up it’s our Title:

If you put all these fields on detail, and then write your sheet title as follows, then our formatting is finished.

We’ve written all the calculations we need at this point. The only thing left to do is set up the worksheet actions. We will need two of these – one to filter to the selected State, and another to prevent Tableau from automatically highlighting the City with the highest Sales.

To add a worksheet action, click on ‘Worksheet’ in the toolbar, and then click on ‘Actions…’. This will bring up a dialogue box from which you can click the ‘Add Action’ button. You will then have to choose what type of action you want: Filter, Highlight or Go to URL. Let’s start with the filter. 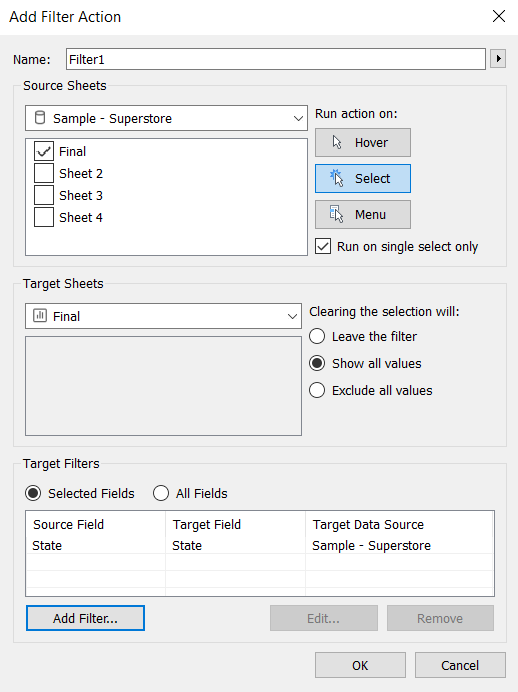 This set up means that our Filter is found on and applying to our one sheet. It is being run when we click something, and when we click one thing only. When we unclick (i.e. click the background) the filter will stop applying and all values will reappear. Finally the bottom shows that we are applying our filter to States.

You could stop now, and the worksheet would be functional. However, every time you drilled down this would happen:

In order to prevent Tableau from highlighting one City, we need to override its default highlighting position with a worksheet action which explicitly tells it what to highlight. 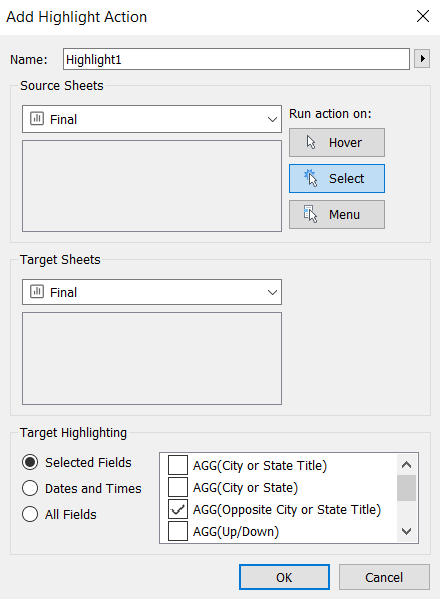 Here we tell Tableau to Highlight the Opposite City or State Title. You don’t have to choose this one, but you want to choose a field which is on detail, but not visible in the view – so when Tableau highlights it, it doesn’t do anything visually.

And there you have it, how to complete WorkoutWednesday Week 41 or set up a worksheet with a drilldown capability.

If you found this useful then let me know on twitter @olliehclarke.