Project: Infographic for a Charity

We had the pleasure of a great full day workshop on infographics with Caroline Beavon where we explored a variety of different infographic styles and design principles, as well as techniques for infographic creation and a thought process including why we were creating the infographic, who the audience was, and how it would serve/reach the intended audience. We looked at what works in an infographic and what doesn’t, and also experimented with a few projects together (a visual CV and an infographic for a fictional homelessness charity).

One method we used was experimenting with lots of different variations or possible ideas (good or bad, even ones we knew we weren’t going to use) and sketching them out very quickly in a grid before choosing the best one to move forward with.

I found the workshop very useful as it gave me more ideas about design aspects and usability when creating my dashboards, beyond just analytics.

The project for the week was to choose a charity and create an infographic for them to implement what we had learnt in the workshop. The charity I chose was WaterAid UK, a British charity who operates globally with local partners. I chose them as I support the good work that they do to improve water, sanitation, and hygiene access around the world.

I was pleasantly surprised when I looked at their website to find it quite stats-heavy, highlighting key interesting numbers throughout the website in an interesting format and including an entire page devoted to statistics (handily named “Statistics” in the navigation section). I decided to use that as a basis for the infographic, and after that was only spoiled for choice for which statistics to use. I looked for statistics which would best lend themselves to a visual in some way and which could be linked together (rather than a disparate group of statistical facts.)

One part of Caroline’s presentation which came back to me as I prepared the infographic was the fact that a large proportion of the general population do not relate well to numbers. This had struck a chord with me at the time, as I recall one encounter in particular where I had said the wrong thing to a new acquaintance who had proceeded to give the appearance of being quite threatened by statistics/probabilities and had immediately recoiled and closed off from the conversation. With this in mind, I found instances in my infographic where I could replace numbers with words, as recommended by Caroline (“nearly half” instead of “42%”).

The intended audience for this infographic was supposed to be the general public, with an aim to raise awareness and potentially donations. The idea was to tweet the finished product to the charity, and with this in mind (as well as a screenshot for Tableau Public), I decided to go for a single-screen landscape view.

I am satisfied with the final result – it is not too cluttered with colour or information. I think it is in line with the organizational style and colour scheme and makes good use of white space while being informative. I tried to maintain a grid layout with 3 x 2 panels and the middle panel being a bit wider (due to the use of a map). With a range of media types (variety of font size, charts types, and picture types), I hope that it is sufficiently eye catching to attract and hold the viewer’s attention. I think there is enough (but not too much) text to read as well.

I would have liked to include a way to donate on the infographic, but was unable to easily find information on the website beyond setting up payment through the website itself. 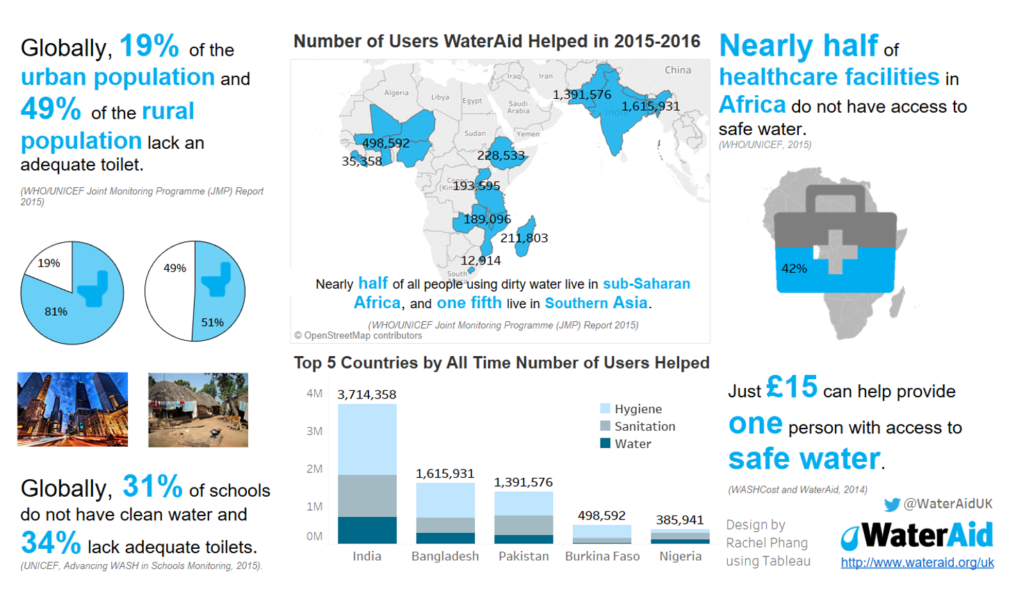