Hello! I’m Tom and I’ve recently joined The Data School in DS14. I thought this would be a great time to reflect on my experiences from my first week and tell you a little bit about my first project on Friday.

On Friday we were given our first project to complete. The brief behind the piece of work was to take a visualisation that we had previously designed and improve it. Additionally we had to add in some data from another source in order to enhance our findings. We had until 1pm to complete this, before presenting it later that afternoon. As this was quite a big task for our first week, we were allowed to pair up with someone from DS13. I was lucky enough to be paired with Kolsuma who helped me huge amounts throughout the half day project.

Kolsuma chose my final interview visualisation which was based around the TfL cycle counters situated on CS6 at Blackfriars. This data set was a little confusing with lots of column headers which were unclear and overall a few pieces of data which seemed a bit odd. However, I was able to create the dashboard below:

We started by trying to determine what worked well and what wasn’t so good. We both agreed that the heat map was good and clearly showed trends and peak times throughout the day, so that should stay. However, a couple of the graphs didn’t add too much value, for example, the average temperature throughout the day, didn’t really relate to the other aspects, therefore that should go!

Before I create anything within Tableau, I always start with sketching and post-it notes. This allows you to get all of the ideas out on a page, and the ability to rearrange these to visualise the image of what you are expecting the dashboard to look like. Here’s the paper version of my dashboard below:

As one of the elements of the project was to add in some additional data, we both agreed that it would be great if we could add in data relating to the availability of the Santander Cycles around the Blackfriars area. Luckily for me, TfL have this data available on their website so I downloaded the related files but then it was Alteryx time…

This was my first time completing my own Alteryx workflow, as this piece of software was completely new to me. The aim of the workflow was to clean up some aspects of the new data set and to also add a spatial file so that I could map the different docking stations near Blackfriars station. Once we had all of the data in an appropriate and clean fashion we were then able to join this together to make one file which included both the new and original data. I would then use this file to create my new visualisation. Here’s an example of the Alteryx workflow that was created:

In the time that I had remaining (about 30 mins!) I was able to create the dashboard below. Although this wasn’t a finished product, it incorporated the heat map from my original viz, and also an interactive map to help visualise all of the docking stations near Blackfriars. 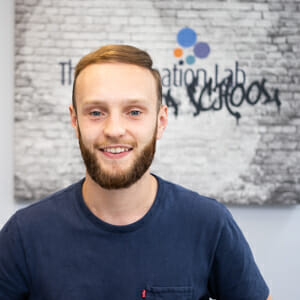