The final day of dashboard week was very different as we didn’t need to do any data prep in Alteryx. Coach Andy conveniently provided us with the .tde file containing the Runkeeper data with his last 286 runs along with the dashboard requirements.

Although I was looking forward to the final challenge for the week, since I enjoyed it quite a lot, the last day was a very frustrating experience.

My morning started with a weird Tableau error about the changing conditions to the license, so figuring that out wiped a whole hour out. Later on it repeatedly stopped responding to any mouse clicks for a period of few minutes. Oh and did I mention that it crashed several times with auto saving, recovering only my first calculation?

I spent Friday evening on Google, troubleshooting my Mac which had a corrupted file system, and had to go through all three levels: recovery mode, safe mode and single-user mode. The good news is I managed to fix the problem, and everything is back to normal!

Challenges of understanding the data

Firstly, there was confusion about units of measure. Andy mentioned that the distance is in meters and he wanted to see miles. However, converting didn’t make any sense, and I suspected that the distance was already in miles. To check my assumption I downloaded Andy’s recent viz with NY Marathon training schedule from Tableau Public, which luckily had some identical runs.

Secondly, since I am not really into running, I was confused by speed and pace, as I always considered them to be synonyms. I started to really worry about my English, but then I found out that Rachel, who usually helps me with English, was similarly confused, so I spent some time googling again.

Finally, the elevation struggle. I have a general idea of what elevation is, but I had no idea what units it is measured in. Thankfully, Philip helped me and explained that elevation is usually in meters (or was it feet?) above sea level. 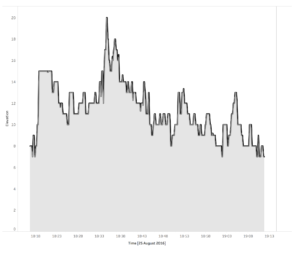 However, summing up the elevation doesn’t make sense. Summing the elevation change is, in my mind, also not a good option. For example, cumulative elevation might be -7, which could mean a number of things: Andy ran down the hill, Andy ran flat and then went down the hill, or he started running in the middle of the hill up, and then came all the way down. This brings more questions than answers, especially without showing the above picture.

Originally, I wanted to show something different than a map with a few numbers around it, because that is how any running app shows your running information, and I wanted to practice some chart types that I’d never done before.

I’ve noticed that Andy’s runs were mainly in London, but he also had a few runs in other countries/locations. So my intention was to compare how his ‘vacation’ running stats differ from the ‘home’ ones. However, in the middle of grouping runs to each location my computer crashed again, and this idea was shelved due to the time constraints.

At the end, my final dashboard didn’t look anything close to what I imagined it to be. In the spirit of a MakeoverMonday I had to put something together in the last hour, so my final dashboard looks exactly what I wanted to avoid. 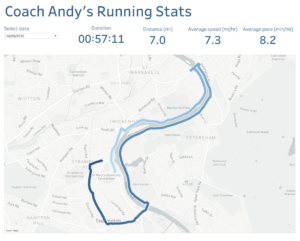 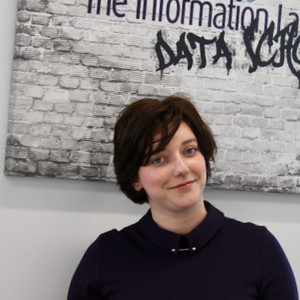 In TrainingLondon, UK
A Letter to Future Data Schoolers

Dashboard Week Day 2 or How to combine two header rows