At last, the long-awaited final day of Dashboard Week had arrived and 8 sleep-deprived and brain-worn members of DS5 traipsed in on Friday morning to deliver our presentations to Andy via GoToMeeting while the fourth challenge had already been uploaded. Straight out of the presentations, it was onto the fourth (and final) challenge.

Given the shortened time frame (first round presentations had finished at 10 am and the next round was due at 3 pm), Andy had helpfully decided we could skip the data prep part and focus just on the visualisation of his running data. There were quite a few guidelines given, including some misleading ones that threw us off for a while (such as that distance was in metres and had to be converted to miles… when in reality it was already in miles). I also ended up spending over an hour trying to understand the fields, given the lack of documentation/description (similar to Thursday’s risk factors data set, when we struggled to find documentation on the field descriptions). Some questions that popped into my mind were: what is the difference between pace and speed? What units are they measured in? What units is elevation measured in? For that matter, what units are any of the fields measured in?

One of my first tasks was to follow Andy’s instructions and convert the duration from seconds into a hh:mm:ss format following the instructions in Jonathan Drummey’s blog post. I then set about experimenting with the fields, trying to map them against each other and doing other transformations and/or calculations as required. There was also some map work for mapping the routes, and I used that as an excuse to try out another one of mapbox’s excellent offerings that had caught my eye earlier in the week, the pencil map. I was pleased when Andy confirmed blue as his favourite colour, as this worked perfectly with the grey of my map and I was able to keep the dashboard down to two colours (and black).

As time grew short, I decided to go with whatever I had and threw things together to get a simple dashboard that fulfilled the requirements of the brief with a map, a filter for the run in question, and detailed statistics of the run underneath. 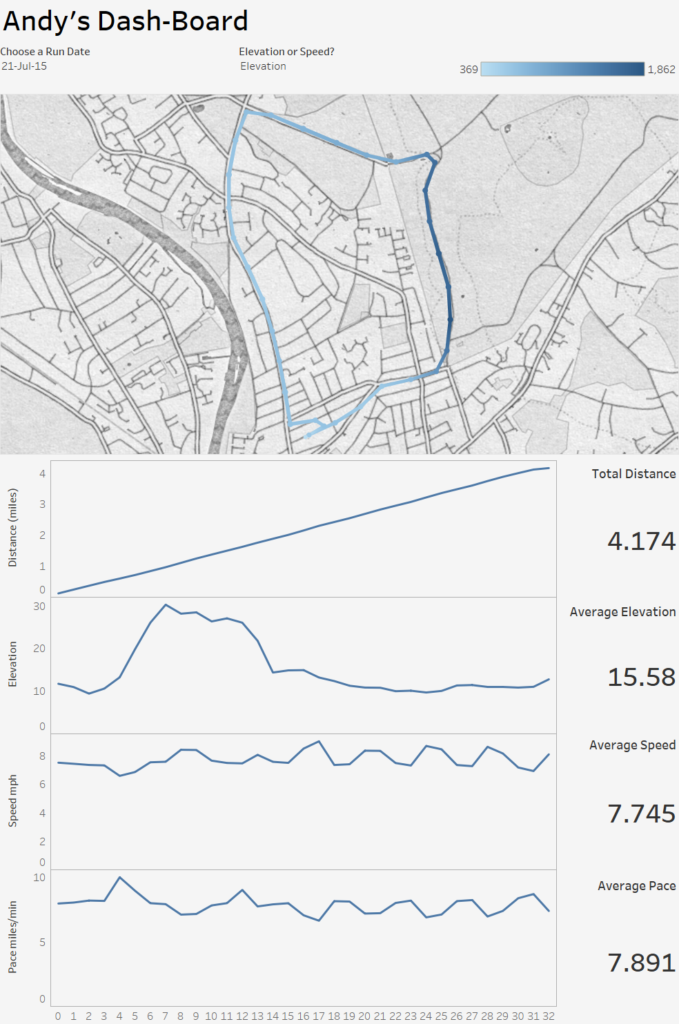 At 3 pm, we logged back onto the GoToMeeting to each present the day’s work as well as one of the other outputs from the week. Finally, there was a sigh of relief as the last presentation wrapped up and with it, Dashboard Week (well, once this post has been published.) Time to catch up on some much needed celebrations (sleep) then!